Total Anger! Man Sets Himself on Fire Using Petrol After Seeing His Wife Dance ‘Somehow’ With Some Men During a Ceremony 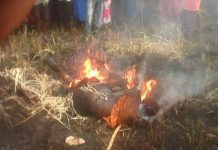 A 35 year old man in Mangochi township in the Southern region of Malawi, has committed suicide by setting himself ablaze using petrol over family dispute that arose after he expressed disgust over the way his wife danced with some men during initiation ceremony.

Police in Mangochi have confirmed of the death in an interview with the press and identified the suspect as Maganizo Wilson.

The police said Wilson picked a quarrel with his wife on Sunday night after getting angry at how she danced with some men during initiation ceremony.

This dispute was reported to council of elders in the community who resolved the issue the same night and Wilson agreed that the issue is over.

But tragedy struck on Monday, September 19 when Wilson set himself ablaze using petrol.

He was rushed to Mangochi District Hospital where Doctors pronounced him dead upon arrival.

Hoodlums suspected to be terrorists have beheaded a 65-year-old man, Nnoruoka Onyeokwu. According to reports, …