Regina Daniels mother, Rita is currently receiving the heat after she tried to ‘play a fast one’, at the 2019 Headies Awards held at Eko Hotels.

The actress who presented the artist of the year award at the event introduced herself as the mother of actress, Regina Daniels.

It all started when she was called upon to present the Artiste of The Year Award.

When She got on stage, she introduced herself as, “Rita Daniels, Mother of Regina Daniels”.

When it was time to announce the winner, Rita Daniels decided to crack a joke.. Apparently, one which many didn’t find funny.

She asked on the Audience to guess on who the winner is, and then she suddenly mentioned her Daughter’s name.

After laughing it off, she then proceeded to calling the winner, Burna Boy.

This introduction got a lot of people talking on social media.

Burna Boy wasn’t available to collect his award. Apparently, he was in London for Wizkid Starboy’s Fest. 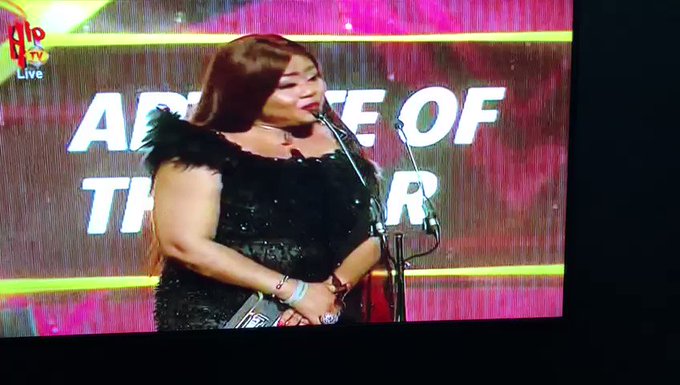 136 people are talking about this