A French doctor has apologized for what he calls his clumsy remark suggesting COVID19 vaccines should be tested on poor Africans.

There has been a furious social media reaction to what Dr Jean-Paul Mira said on live French television.

Jean Paul Mira is head of intensive care at Cochin hospital in Paris.

He was being asked on the LCI television channel about testing COVID 19 vaccines.

Mira said the value of this being done in Europe and Australia was undermined by the number of people there using personal protective equipment.

He suggested, by his own admission provocatively, that it would be more effective in parts of Africa, where there are no masks, no treatment and no intensive care.

Mira’s apologized to those who were hurt, shocked or felt insulted at his remarks clumsily expressed.

Two French doctors were accused of racism for suggesting that a potential vaccine for coronavirus should first be tested on people in Africa.

Al Jazeera reports that the comments were made on the French television channel, LCI, during a discussion on Wednesday about COVID-19 trials set to be launched in Europe and Australia to see if the BCG tuberculosis vaccine could be used to treat the virus.

“It may be provocative. Should we not do this study in Africa where there are no masks, no treatment or intensive care, a little bit like it’s been done for certain AIDS studies, where among prostitutes, we try things, because we know that they are highly exposed and don’t protect themselves?” said Jean-Paul Mira, head of the intensive care unit at the Cochin Hospital in Paris.

Camille Locht, research director at France’s national health institute, Inserm, agreed: “You are right. And by the way, we are thinking of in parallel about a study in Africa using this same approach.”

It did not take long for the backlash to begin on social media.

“Africa isn’t a testing lab,” Ivorian professional football player Didier Drogba, who used to play for Chelsea, wrote on Twitter. “I would like to vividly denounce those demeaning, false and most of all deeply racist words.”

Olivier Faure, of France’s Socialist Party, said the marks were hardly a provocation. “It’s not provocation, it’s just racism,” he wrote on Twitter. “Africa is not the laboratory of Europe. Africans are not rats!”

t is totally inconceivable we keep on cautioning this.
Africa isn’t a testing lab.
I would like to vividly denounce those demeaning, false and most of all deeply racists words.

Helps us save Africa with the current ongoing Covid 19 and flatten the curve. 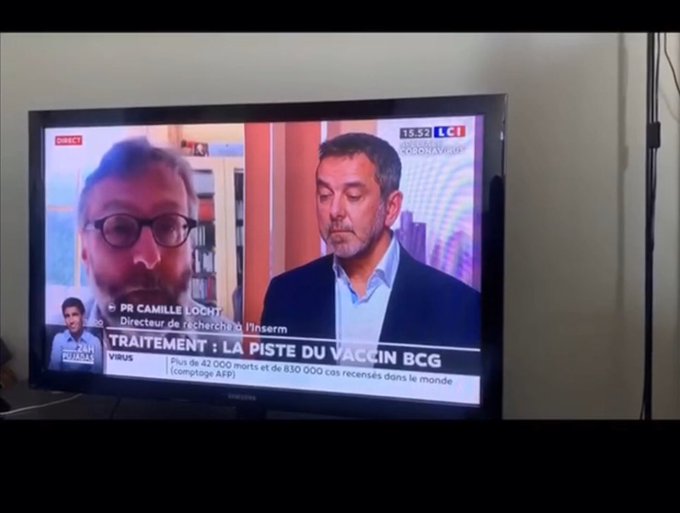 17.2K people are talking about this

The group issued a statement saying, “No, Africans aren’t guinea pigs”, adding that comparison with AIDS and prostitutes was “problematic” and “unwelcome”.

On Twitter, Inserm, Locht’s employer, posted a statement accompanied by the hashtag #FakeNews, writing that the remarks were taken out of context.

“A distorted video, taken from an interview on LCI with one of our researchers about a study on the potential use of the BCG vaccine against COVID-19, is now the subject of erroneous interpretation,” the statement said.

It added that Africa “shouldn’t be forgotten or excluded from this research because the pandemic is global”.

Mira later apologised in a statement published by his employer.

“I want to present all my apologies to those who were hurt, shocked and felt insulted by the remarks that I clumsily expressed on LCI this week,” he said.

In an interview with the Huffington Post, Mira further clarified: “Africa could be even more exposed to serious forms of harm because there will be so few masks and little confinement because of societal structure.”

“It seemed interesting to me that in addition to France and Australia, an African country could participate in this study which I had never heard of before hearing about it on the show,” he added.

Africa is currently the continent least affected by COVID-19, with nearly 7,500 cases and about 320 deaths, though there are fears that the number of undetected cases is low due to a lack of testing.

Experts warn that poor health systems in many African countries could lead to a disaster in the event of a severe coronavirus outbreak, reports Al Jazeera.