Egyptian goalkeeper, Mohamed El-Shenawy, has refused to accept the Man-Of-The-Match award given to him after their opening group encounter with Uruguay because the award was given by Budweiser, an Alcohol company.

El-Shenawy’s exceptional performance during the encounter ensured his side was not embarrassed though they lost 0-1 to Uruguay.

He rejected Man of the Match trophy given to him after the match on June 15, because the award’s alcoholic sponsors are at odds with his religion.

Though the trophy does not contain alcohol, it is shaped like a goblet and has Budweiser as its official sponsor. 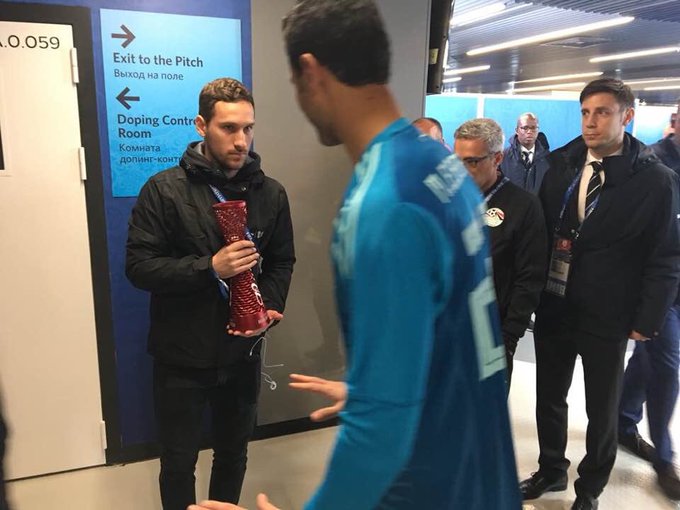 .@FIFAcom have a deal with @Budweiser for the #ManoftheMatch award. Being alcohol, there are 3 North African nations + Saudi & Iran in the @FIFAWorldCup. Did they not think these guys won’t accept the award? #EGY⁠ ⁠’s @Melshenawy did not take his today.

A social media user, Marwan Ahmed, took to Twitter to share a snap of the goalie refusing to pick up the award, while a man stands awkwardly holding it out to him, asking whether FIFA should have foreseen the problem given that a number of majority-Muslim countries – including Iran, Saudi Arabia and Senegal – are in the competition this year.

High profile players such as France’s Paul Pogba and Germany’s Mesut Ozil are also Muslim and might not want to accept an award that’s so heavily associated with booze.

Though Egypt lost 1-0 to Uruguay in that game after an 89th minute goal from Jose Gimenez, however, El-Shenawy worked so hard in the game, making him a truly worthy recipient of the title of Man of the Match – regardless of whether he chooses to pick up the trophy or not.

Nwabueze is a writer with passion for cutting-edge news
Previous A step-by-step guide to get richer, healthier, and happier in 31 days
Next List Of Radio Stations In Jigawa State and Their Frequency (2019)